NIC teaming, or channel bonding or Link Aggregation is a new feature in Windows 2012. Previously NIC teaming could only be accomplished in Windows by using a Vendor specific driver. With this new Windows feature, one can use up to 32 network cards of different vendors in “team”. 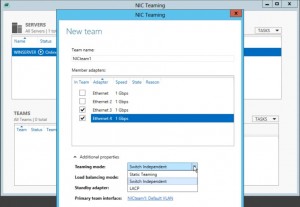 The default option is switch independent. This is the only option that works with more than one switch. Switches are unaware of NIC teams.

LACP or Link Aggregation Control Protocol is the successor of static teaming. It uses small packets (LACPDU’s) between the switch and the computer to dynamically check if connections are available. When a port/NIC fails, LACP doesn’t use that port anymore in the NIC team.

Load Balancing Mode configures the way the traffic flows through the NIC teams. We don’t want one connection (between 1 host and 1 switch) to flow through different ports, because parts of a packet could arrive in the wrong order (and it would require to much time for a switch to reassemble those packets).

To decide which specific port and which specific NIC will be used for a connection, a hash is created, containing (sometimes parts of)  Source/Destination IP/MAC addresses and ports.  This hash is unique per connection.

When using virtual machines (Hyper-V), the MAC address of the Hyper-V-switch port is used as a unique identifier for the connection.

Default Windows will use all NICs from the team in an Active-Active manner.

An administrator can decide to provide a failover and configure a NIC as a Standby NIC. This NIC will only become Active when the other NIC in the team fails.

Remark: A common misunderstanding seems to be that, when doing Active-Active teaming with NICS of 1Gbps, one could double the speed to 2Gbps. This is NOT the case when only one host connects to the switch, since one connection always flows through the same switch port and the same physical NIC port. When two hosts make a connection, each host can get a maximum of 1Gbps.

More information on this topic in this doc at http://www.microsoft.com/en-us/download/details.aspx?id=30160